Conference Series Ltd invites all the participants across the globe to attend 16th International Conference on Emerging Materials and Nanotechnology London, UK.

Pavel Lazarev is the inventor of Capacitor Sciences’ high permittivity technology and founder of the Company. He also is the founder of Cryscade and inventor of the company’s Donor-Bridge-Acceptor technology. He received his Masters from Moscow State University, Ph.D. in Crystallography and Dr. of Science Degree in Biophysics from the Russian Academy of Science. Previously, Pavel founded Nanotechnology MDT (www.nt-mdt.com), Akvion (www.akvion.ru), Optiva Inc., Ribtan Inc. (www.ribtan.com) and Crysoptix KK, (www.crysoptix.com). Pavel was an editor of International Journals ‘Molecular Engineering’, ‘Nanobiology’ and ‘Molecular Materials’. Pavel has published several books, over 150 technical publications and over 200 inventions with emphasis on the R&D and production of functional crystalline films based upon coatable lyotropic liquid crystals.

Statement of the Problem: Efficient energy storage is crucial both for everyday operations and for the long-term sustainability of human civilization. Electrochemical storage units, such as batteries, have large energy density but small power density and, moreover, can degrade relatively fast. Electrostatic storage units, such as capacitors, have the advantages over the batteries in almost all areas but have much smaller energy density. We proposed to use molecular   film capacitors where the energy is stored in highly polarizable aromatic cores, dielectrophores, enveloped in resistive structure by aliphatic tails which provide high dielectric strength. We believe that if the induced dipole depends nonlinearly on the external electric field, at high operating voltage such structure can have the energy density comparable with that of the batteries and even exceed it.

Methodology: Thin films based on organic molecules were grown by the cascade crystallization procedure. Three samples with the P032, P033, and P036 molecular units, see Fig. 1, were charged using corona poling method, and compared to the polypropylene film (PP). The surface potential was measured by the Kelvin probe technique with the bottom electrode grounded.  The dependencies of the surface potential on the introduced charge are shown in Fig. 1.

Findings: While the PP film exhibits the linear relation between the charge and voltage, the corresponding dependence is highly nonlinear for our organic films for elevated voltages. Our estimations demonstrate that the stored energy for the P036 molecular compound can exceed that of the PP film up to 3000 times.

Conclusion & Significance: We demonstrate organic-molecules-based thin films which can be used for the energy storage applications. With high energy density and large breakdown voltage, they can eventually replace the electrochemical batteries. Dr. Dimitris Drikakis is Professor of Engineering Science, Executive Director of the Strathclyde Space Institute. Prior to his present positions, he was the Executive Dean (Engineering) and Associate Principal and at the University of Strathclyde, (till June 2017) and Head of Aerospace Sciences and Professor of Fluid Mechanics & Computational Science at Cranfield University (2003-2015). His expertise is in computational fluid dynamics (CFD), fluid mechanics (particularly compressible flows), and micro/nanoscale processes at fluid-solid interfaces. To date, he has co-authored two books in the field of computational fluid dynamics and has published about 400 papers/book chapters in the above technical areas.

The paper concerns processes at fluid/solid interfaces, which can lead to the design of new materials that meet specifications with regard to flow velocity, thermal conductivity and shear viscosity. In particular, the talk will focus on the effects of surface roughness on nanoflows.

A fractal model is employed to model wall roughness, and molecular simulations are performed for liquid argon confined by two solid walls. It is shown that the surface roughness reduces the velocity in the proximity of the walls with the reduction being accentuated when increasing the roughness depth and wettability of the solid wall.

It also makes the flow three-dimensional and anisotropic. In flows over idealized smooth surfaces, the liquid forms parallel, well-spaced layers, with a significant gap between the first layer and the solid wall. Rough walls distort the orderly distribution of fluid layers resulting in an incoherent formation of irregularly shaped fluid structures around and within the wall cavities. 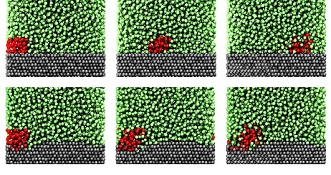 Ludek Frank is a senior researcher at the Institute of Scientific Instruments of the Czech Academy of Sciences. He has expertise in the methodology of electron microscopy and spectroscopy with an emphasis on low-energy electron applications. Currently he is studying the scanning transmission electron energy at near-zero energies of electrons and its application in material as well as biomedical sciences. Eliska Mikmekova is a staff researcher at the same Institute and head of the Group of Microscopy and Spectroscopy of Surfaces. She has expertise in the generation and diagnostics of ultrafine layers and 2D crystals. She is also developing and promoting the method of electron-stimulated desorption of adsorbed hydrocarbons.

The creation of various nanostructures on surfaces by means of the electron-beam-induced deposition of carbon from hydrocarbon precursors has proven to be a productive nanotechnological tool. On the other hand, the same phenomenon represents an unpleasant challenge when operating a scanning electron microscope with the usual standard vacuum in the specimen chamber. Even under ultrahigh vacuum conditions, a successful solution has to include in-situ cleaning of the surface under observation. Our experiments have revealed the phenomenon to be crucially dependent on the energy of incident electrons to such an extent that deposition can be converted to removal of the precursors, thereby preventing carbon coating. In addition to the electron energy, other important governing factors have been identified including the electron dose, the electron current, the electric field above the surface in question and the presence of a gas such as oxygen. Another extremely important circumstance is that the removal of precursors can be achieved not only under ultrahigh vacuum conditions, but also under standard high vacuum conditions of the order of 10-4 Pa. The pilot study of the phenomenon has been performed on graphene – both free-standing and supported graphene – and the cleaning effect was demonstrated by decreased reflectivity and significantly increased transmissivity of the graphene for slow electrons of energies down to fractions of eV. Possible radiation damage of the graphene due to the electron irradiation was checked by means of Raman spectroscopy and found to be negligible below an electron landing energy of 50 eV. The phenomenon was further checked by means of the XPS established, development of the ratio between sp2 and sp3 bonds corresponding to crystalline and amorphous carbon, respectively, and the ratio between carbon and oxygen intensities in the Auger electron spectrum. The phenomenon can be employed, for example, when aiming for any “true” surface study in a standard vacuum electron microscope.